A reading from the book of the Prophet Ezekiel        34:1-11
Theme: I am going to take my flock back from them and I shall not allow them to feed my flock. 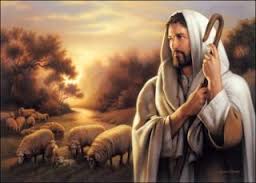 The word of the Lord was addressed to me as follows,
‘Son of man, prophesy against the shepherds of Israel; prophesy and say to them,
“Shepherds, the Lord says this:
Trouble for the shepherds of Israel who feed themselves! Shepherds ought to feed their flock, yet you have fed on milk, you have dressed yourselves in wool, you have sacrificed the fattest sheep, but failed to feed the flock. You have failed to make weak sheep strong, or to care for the sick ones, or bandage the wounded ones. You have failed to bring back strays or look for the lost. On the contrary, you have ruled them cruelly and violently. For lack of a shepherd they have scattered, to become the prey of any wild animal; they have scattered far. My flock is straying this way and that, on mountains and on high hills; my flock has been scattered all over the country; no one bothers about them and no one looks for them.

Well then, shepherds, hear the word of the Lord. As I live, I swear it – it is the Lord who speaks
– since my flock has been looted and for lack of a shepherd is now the prey of any wild animal, since my shepherds have stopped bothering about my flock, since my shepherds feed themselves rather than my flock, in view of all this, shepherds, hear the word of the Lord. The Lord says this: I am going to call the shepherds to account. I am going to take my flock back from them and I shall not allow them to feed my flock. In this way the shepherds will stop feeding themselves. I shall rescue my sheep from their mouths; they will not prey on them any more.

For the Lord says this: I am going to look after my flock myself and keep all of it in view.

1. The Lord is my shepherd;
there is nothing I shall want.
Fresh and green are the pastures
where he gives me repose.
Near restful waters he leads me,
to revive my drooping spirit.                     Response

2. He guides me along the right path;
he is true to his name.
If I should walk in the valley of darkness
no evil would I fear.
You are there with your crook and your staff;
with these you give me comfort.              Response

Jesus said to his disciples:
‘Now the kingdom of heaven is like a landowner going out at daybreak to hire workers for his vineyard. He made an agreement with the workers for one denarius a day, and sent them to his vineyard. Going out at about the third hour he saw others standing idle in the market place and said to them, “You go to my vineyard too and I will give you a fair wage”. So they went. At about the sixth hour and again at about the ninth hour, he went out and did the same.

Then at about the eleventh hour he went out and found more men standing round, and he said to them, “Why have you been standing here idle all day?” “Because no one has hired us” they answered. He said to them, “You go into my vineyard too”.

In the evening, the owner of the vineyard said to his bailiff, “Call the workers and pay them their wages, starting with the last arrivals and ending with the first”. So those who were hired at about the eleventh hour came forward and received one denarius each. When the first came, they expected to get more, but they too received one denarius each. They took it, but grumbled at the landowner. “The men who came last” they said “have done only one hour, and you have treated them the same as us, though we have done a heavy day’s work in all the heat.” He answered one of them and said, “My friend, I am not being unjust to you; did we not agree on one denarius? Take your earnings and go. I choose to pay the last comer as much as I pay you. Have I no right to do what I like with my own? Why be envious because I am generous?” Thus the last will be first, and the first, last.’

This is one of the parables of Jesus to which people often react negatively. There is a feeling that the workers who worked all day were hard done by because those who worked for the last hour were given the same wage. However, in the world of the story, the employer did not treat those who worked all day unjustly; he gave them a day’s wages for a day’s work. The surprise in the story is that the employer was exceptionally generous with those who worked for an hour, giving them a day’s wages as well. No injustice was done to anyone, but some of the workers were the recipients of a surprising and extravagant generosity.

Jesus began this parable, with the phrase ‘The kingdom of heaven is like … ’. The world of God is reflected in the world of the story; the character of the employer reflects God in some way. Jesus appears to be saying that God’s generosity will always take us by surprise. God’s way of dealing with us breaks the bounds of what humans would consider just and fair. What God does for us far exceeds what we might do for God. God does not relate to us on the basis of what we have earned or deserved. God’s generous love is pure gift; it is not a reward for labour rendered. We serve the Lord from one end of the day to the other, not to gain or earn his love, but in grateful response for the love already given to us long before we could do anything.

The Scripture Readings are taken from The Jerusalem Bible, 1966/7/8 published 1966/7/8 by Darton, Longman and Todd Ltd and used with the permission of the publishers.  http://dltbooks.com/
The Gospel Reflection is available with our thanks from Reflections on the Weekday Readings 2021-2022: My Words Will Not Pass Away by Martin Hogan and published by Messenger Publications  c/f www.messenger.ie/bookstore